Maybe something like
this should be incorporated
for next years meetings...

Great Inspiration!
Posted by Dino Mom at 7:19 PM No comments:

skeletons of the dinosaur

triceratops have been found in 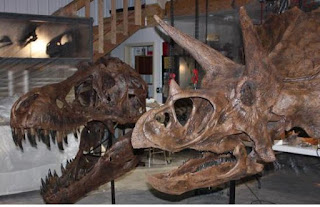 "The dig indicates that there was some sort of parental pair and nowhere in the literature has that ever been noted before, and that's unprecedented," Peter Larson, president of the Black Hills Institute of Geological Research told the Rapid City Journal.


Read more at: www.news.com.au/world-news/three-largely-intact-fossils
Posted by Dino Mom at 8:47 AM No comments:

INTO THE WORLD OF DINOSAURS
Combining Science and Art

We'll look at computer generated imagery, learn how to draw dinosaurs, and various dinosaur art projects. We'll also include optional educational movie nights along with a field trip! Kids will meet once a month and earn a stamp in their passport books for traveling back in time to the world of dinosaurs.

This club has been recognized by the National Park Services!

Check out this link below to my other blog...

Dino Mom
A mother to a beautiful, creative mind that is always my inspiration.